Share a memory
Obituary & Services
Tribute Wall
Read more about the life story of Olive and share your memory.

It is with immense sadness that we announce the sudden passing of our Mom.  She was born June 26th in Kindersley, Saskatchewan, the second child in her family.  Mom took her early schooling in Smiley and later in Kindersley.  She was active in the church youth group where she met our Dad, and married in July of 1962.  Susan was born in April of 1963, Robert in April of 1965, and Heather in November of 1971.  They moved to Calgary in 1966, where she made many lifelong friends, they then moved to Carbon in the fall of 1973.

Mom worked for Dad doing bookkeeping at the John Deere dealership in Carbon, and Tall Don’s grocery store.  She also worked several other jobs including the Rabbit Hole and Co-op Hardware.  In 1985, Mom moved to Claresholm where she enjoyed her time working at Creative Industries and making new friends.  She later met and married John Coutts in 1994.

In 2010, Mom lost John in an accident and made the move to an apartment and in 2017 to Willow Creek continuing care.  She had many friends that would come to see her, just stop to say hello, bring her an iced cap from Tim’s or stop to play a game or two with her.  She loved spending time with her family most.  Mom loved to tell us the jokes she had or a saying she had seen somewhere, her memory was terrific.

Olive is survived by her daughters, Susan Nairne (Terry), and Heather Gallagher (Sean), her grandchildren, Wesley and Bernadette Awesome, Stacee Amos, Jessica Nairne (Jamin), Evan Gallagher (Kate), and Avery Gallagher, and great grandchildren Annastasia Amos and Austin Hosick.  She is also survived by her brother Norman Krogstad, sister in law Vivian Krogstad, brother in law Garry Smith and numerous special nephews and nieces as well as a lifetime of friends.

She was predeceased by her son Robert in March, her husband John Coutts, her sister Ruth Smith, brother Don Krogstad and sister in law Diane Krogstad, as well as her parents Oliver and Beatrice Krogstad.

The family would like to thank the staff of the Willow Creek continuing care home for the care and patience shown to Mom during her time there.  She was always happy to have someone to help her put her jewellery on, paint her nails or play a game with her.

To send flowers to the family or plant a tree in memory of Olive Diane (Krogstad) Coutts, please visit our floral store. 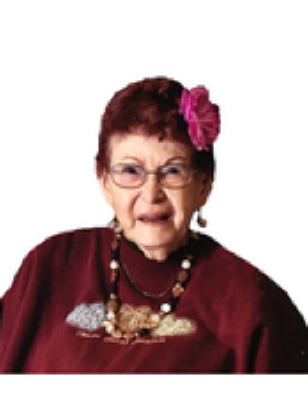